Finding Picasso:
I first wrote "Finding Picasso" in Sept. 2004, but it never went anywhere. The story shows a darker side of protagonist Mick Murphy and that's maybe why I like it and some don't. I've only done some minor editing, so it's pretty much the way I wrote it in '04.

I had the idea for the story years ago as I walked through the Museum of Fine Art in Los Angeles and saw some Picasso painting that I liked. How would I steal them, I wondered and found the hallway that appears in the story. Of course, I didn't steal them, but the seed was planted, and I had fun harvesting it when it had ripened. 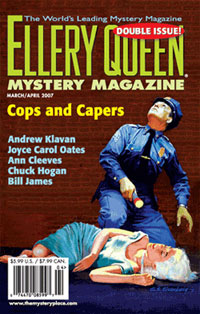 Murder in Key West:
The March/April 2007 double issue of Ellery Queen Mystery Magazine is off The March/April 2007 double issue of Ellery Queen Mystery Magazine the racks, so I thought I would put my story from that issue, Murder in Key West, in my collection of short stories. I think of it as an introduction to my novel "Chasin' the Wind," since Liam 'Mad Mick' Murphy, Key West Police Chief Richard Dowley, Key West Police Det. Luis Morales, KWPD CSI officer 'Sherlock,' and Jesuit Padre Thomas are all characters in my Mad Mick Murphy Mystery series. The short story is a preamble to the series and brings a little background of the characters to the reader. I hope you like it.

Drumstick Murder:
"Kris Kristofferson's gruff voice thundered like hurricane winds from the multiple speakers in the Key West Saloon's showroom, his recorded words vibrating off the walls as he sang about love and loss, whiskey, pilgrims, Sunday mornings, and traveling with Bobby McGee.

Window light dimly illuminated the room, the A/C was on high, and it was chilly. I saw Dallas Lucas sitting by the drum set on the shadowy stage about the same time I noticed the CD unit's remote control on the bar. I put my camera bag down and lowered the volume."
The Floater:
"Some days just seem to begin right, to hold promise. The day began that way. I stood barefoot, shirtless, wearing cutoff shorts on the deck of my 40-foot sloop, the Fenian Bastard, and I had a cup of freshly brewed coffee and the daily paper. The morning sun had begun to inch its way over Key West, and the summer breeze carried scents of tropical flora and almost tasted salty. Cotton-ball-like clouds moved across the dark blue sky. The temperature was in the low-80s and by noon, it would be closer to 90. I loved it. It looked like another perfect hurricane-free day in Paradise."

Right As Wrong Can Be

When Mick Murphy stops at night on U.S. 1 to assist a teenage girl in distress, his world begins to unravel. Chased by thugs, the girl is traumatized and can’t speak to Murphy. Once at home, his live-in Irish girlfriend Peggy Naughton helps communicate with the teenager. Written 2016

After two suspicious deaths in Key West, Mick Murphy gets caught up in a conspiracy theorist dream. Corrupt Florida politicians, all the way to the governor, land developers and banks are ready to develop the pristine Keys, including Murphy's beloved Key West. Written 2015

A pregnant woman friend of Mick Murphy's is beaten to death. As she lay dying Murphy promises to make the killer face justice. His pursuit takes him and his mismatched eclectic friends to the Ocala National Forest looking for a meth lab run by outlaw bikers. Written 2015

A simple request of Mick Murphy to find his cousin Cecil Fahey turns into a struggle of avoiding irate SAS soldiers determined to kill Cecil for his IRA activities in the '80s. Written 2014

When journalist Mick Murphy runs into his love fantasy in a wintry Harvard Yard, he is soon dragged into a web of brutal killings that began in Boston and end in Southern California. Written 2011

When I first came to Tijuana, Mexico, more than 20 years ago, it was a sleepy border town, minutes from San Diego, California, where liquor was cheap and women plentiful. Written 2011

"Chasin' the Wind" nails the colorful and often violent action in both Key West, Florida, and Havana, Cuba. It navigates corruption and small town politics in the southernmost city of the United States. Written 2009

I have been following for more than a year the Los Angeles Times' great series, Crisis in Mexico that deals with the awful drug war going on south of our borders. Written 2013

Stairway to the Bottom

When Mick Murphy discovers the body of a Cold War female assassin he is draw into a drama that includes a hit man for Boston gangster Whitey Bulger and some semi-retired Cold War agents in search of $20 million in diamonds taken by a rogue agent. Written 2011

To Beat The Devil

Because of the destructive ending of Stairway to the Bottom, this sequel begins with Norm telling the story. If you haven't read the earlier book, you should before reading the sequel. Mick Murphy begins telling the story in the book's second part, when the crew returns to Key West. Written 2013